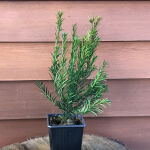 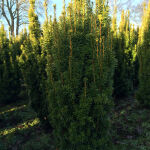 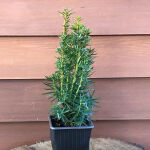 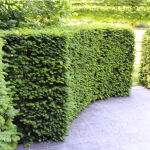 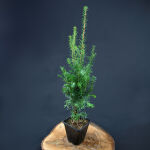 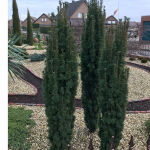 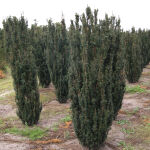 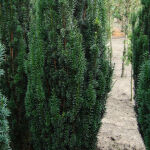 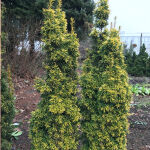 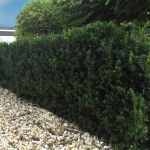 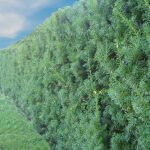 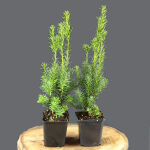 The yew - a hedge with a history

Among hedge plants, the yew is probably the most popular. The yew or taxus hedge convinces ambitious hobby gardeners and also real experts in landscaping especially through its excellent properties as a hedge plant. All yew varieties are evergreen, are characterised by fast and reliable growth and are particularly resistant to pruning and frost.
The yew has been native to European regions for thousands of years and is one of the few native evergreen plants. Due to its longevity, it can also be admired as a natural monument in some places. There are many yew trees in Europe that are over a thousand years old and have grown into impressive trees over the centuries.

The best known in this country is probably the common yew or Taxus baccata. Apart from this, however, various other species are known that are also very suitable as hedging plants. For example, the cup yew is very popular because of its slender growth and can be used not only as a hedge plant but also as a specimen plant. The same applies to the yew varieties in the columnar yew category.
All yews have their fast and dense growth in common. They are essentially distinguished by different shades of colour. In addition, some yew varieties also bear fruit. These usually grow in the form of red berries and are not suitable for consumption.

Taxus hedges are characterised by their undemanding nature. Yew hedges generally get along well with any conventional garden soil. It is important that the plant is not exposed to waterlogging. In terms of location, both the common yew and other varieties are completely undemanding. Occasional fertilisation promotes healthy growth.
The yew only needs to be pruned once a year. The best time for pruning is at the end of June and beginning of July, shortly after the summer solstice. When pruning yew hedges, make sure that you have sharp scissors, as clean cuts allow a quicker recovery from pruning. If the plants are pruned at the specified times, they will only sprout again after some time but reliably, and they will redensify in any thinned areas.

The taxus hedge enhances every garden

Hedge plants such as the common yew or other species are suitable for all conceivable garden styles. Yew is particularly suitable as a hedge plant because it is evergreen and grows relatively quickly into dense yew hedges. They are therefore particularly suitable as a natural garden fence. In rustic gardens, the yew is also suitable as an extremely long-lived and low-maintenance specimen plant. It is also very suitable as an internal garden divider.
In very linear gardens, yew hedges are a welcome addition due to their resistance to pruning. It can be cut into shape very well and grows opaque.
Whether it is a styling garden, a theme garden or a natural garden, the yew will enhance your personal garden concept with its easy-care, evergreen and undemanding nature. Yews are particularly decorative when combined with flowering plants and shrubs. For example, rhododendrons, lilacs or rose bushes are very suitable.

With us you will find a selection of different yew hedges to suit your individual needs. As hedging plants, yews are a real all-rounder. Undemanding and easy to care for, they fit into any garden and form a natural and decorative screen.
If you want to buy a yew, you have come to the right place. We offer yews of the best quality. If you have difficulties choosing, each yew variety in our online shop is described in detail.

By selecting "Accept all", you give us permission to use the following services on our website: YouTube, Vimeo, ReCaptcha, Google Tracking, dash.bar. You can change the settings at any time (fingerprint icon in the bottom left corner). For further details, please see Individual configuration and our Privacy notice.

The settings you specify here are stored in the "local storage" of your device. The settings will be remembered for the next time you visit our online shop. You can change these settings at any time (fingerprint icon in the bottom left corner).

To view Vimeo contents on this website, you need to consent to the transfer of data and storage of third-party cookies by Vimeo.. This allows us to improve your user experience and to make our website better and more interesting. Without your consent, no data will be transferred to Vimeo. However, you will also not be able to use the Vimdeo services on this website.

To submit forms on this page, you need to consent to the transfer of data and storage of third-party cookies by Google. With your consent, reCAPTCHA, a Google service to avoid spam messages via contact forms, will be embedded. This service allows us to provide our customers with a safe way to contact us via online forms. At the same time, the service prevents spam bots from compromising our services. After you gave your permission, you might be asked to answer a security prompt to send the form. If you do not consent, unfortunately you cannot use the form. Please contact us in a different way.

To send data to Google, you need to consent to the transfer of data and storage of third-party cookies by Google.. This allows us to improve your user experience and to make our website better and more interesting.

Data is stored in order to recognize you on future visits.

Would you like to see these contents? Activate the desired contents for one session only or allow the website to remember these settings. Once you have given your consent, the third-party data can be loaded. For this, third-party cookies might be stored on your device. You can change these settings at any time (fingerprint icon in the bottom left corner). For further details, please see the Privacy notice.